If there is anything that symbolizes the horror of American atrocities, the sacrifice of our freedoms, the distortion of our law, it is Guantanamo. Keep track of this story, don't let this embarrassment be forgotten, lest you be the next secret prisoner.

June 29, 2007 · The U.S. Supreme Court on Friday reversed course, deciding to review whether Guantanamo Bay detainees may go to federal court to challenge their indefinite confinements.

The unusual move is a setback for the Bush administration, which has argued that a new law strips courts of their jurisdiction to hear detainee cases.

In April, the court turned down an identical request, although several justices indicated they could be persuaded otherwise.

The justices did not indicate what changed their minds about considering the issue. But last week, lawyers for the detainees filed a statement from a military lawyer in which he described the inadequacy of the process the administration has put forward as an alternative to a full-blown review by civilian courts.

"This is a stunning victory for the detainees," said Eric M. Freedman, professor of constitutional law at Hofstra Law School, who has been advising the detainees. "It goes well beyond what we asked for and clearly indicates the unease up there" at the Supreme Court.

June 29, 2007 · In a highly unusual reversal, the Supreme Court has agreed to review whether detainees at Guantanamo Bay, Cuba, can challenge their confinement in federal court by filing what is known as a writ of habeas corpus. The announcement represents a rare change of course for the nation's high court, which earlier decided not to take on the case.

Here, a guide to some of the legal issues involved:

What is habeas corpus?

"Habeas corpus" is a Latin phrase meaning "you have the body." It's an ancient concept. In old English law, it was used to refer to a judge's order (or "writ") to bring a prisoner before a court to determine whether his imprisonment was unlawful.

The Guantanamo military tribunals, called military commissions, were created by executive order in November 2001, but in June 2006, the Supreme Court struck down the system. In October 2006, Congress passed the Military Commissions Act, establishing a new system of military tribunals to hear cases involving Guantanamo detainees. Those cases include allegations of war crimes, and determinations of whether a detainee is an enemy combatant.

Without habeas corpus, there are currently two routes to the federal courts. (See accompanying chart.) The Combatant Status Review Tribunal determines whether a detainee is an enemy combatant. The Court of Military Commissions decides whether a detainee committed war crimes. Both of those decisions are ultimately reviewable by the U.S. Circuit Court of Appeals for the District of Columbia and the Supreme Court of the United States.

In 2006, in the final days of a Republican-led Congress, lawmakers made what some consider a serious mistake.

In a law establishing military commissions, Congress did away with habeas corpus protections for all foreigners detained by the United States as suspected terrorists. That means that, unlike U.S. citizens, these people do not have access to federal courts to challenge their detention.

July 30, 2007 · The Pentagon has been trying to gradually reduce the number of prisoners being held at the U.S. detention camp at Guantanamo Bay, Cuba. Scores of terror suspects — held for years without charge — are being repatriated to their home countries, or to other nations willing to take them.

Critics, however, say that the release of hundreds of detainees undermines the administration's assertion that all Guantanamo prisoners are extremely dangerous. They say it is likely there was not enough evidence to hold them in the first place.

August 7, 2007 · Some prisoners at Guantanamo Bay, Cuba, do not want to go home. The Bush administration wants to lower the number of prisoners there and is set to release some 80 detainees, but neither their home countries nor a third country will take them. About 420 detainees have been released. While many prisoners at Guantanamo Bay, Cuba, have fought for years to gain their freedom, at least some are now petitioning U.S. courts to remain in custody for fear they would be tortured or killed when they return home.

The ironic twist has complicated the Bush administration's plan to shut down the politically embarrassing U.S. military prison that since Sept. 11, 2001 has housed nearly 800 prisoners, many of them languishing without charge.

Currently, about 80 of the 360 detainees still at Guantanamo are cleared for release. But some fear they will be tortured if they return to their home countries – and there are problems getting third nations to take them.

"The paradox of all this is that he didn't want to be in Algeria in the first place, and now they're going to send him back to a place where he desperately doesn't want to go; worse, even, than being in Guantanamo," Detainee Lawyer, Smith said.

Then there is the third option: "Then without any warning at all we received a phone call in November 2006, and we were told that Dr. Mohammed had been released from Guantanamo and was then en route to Tirana, Albania," she said.

Castle says Mohammed now lives in a single room, without any central heating, at a refugee camp in Albania. It's not Guantanamo, it's not Algeria, but it's not home.

August 25, 2007 · The new U.S. Court of Military Commission Appeals has heard arguments in its first case. Guantanamo detainee Omar Khadr was captured in Afghanistan in 2002 for allegedly killing a U.S. soldier. A semantic dispute over the term "unlawful" is at the heart of the debate.

"This is about the credibility of the U.S. and the perception at home and abroad of our commitment to the rule of law," Lt. Commander William Kuebler told reporters outside the courthouse. Keubler is leading Khadr's defense and, as he sees it, the Bush administration is creating a legal system for the Guantanamo prisoners on the fly.

"We are designing a process after the fact to convict people we have already basically determined are guilty," he said. "And that is an absolute affront to the rule of law."

Civil liberties advocates say the trials are a sham. The head of the government's office of prosecution, Mo Davis, said detainees were getting the same due process as soldiers facing court martial.

"If these rules and judges are good enough for members of the U.S. armed forces, then it is good enough for these trials," he said. "We have nothing to be ashamed of in this process. This isn't a kangaroo court."

August 27, 2007 - Israel has a system that affords far more rights to detainees than we do at Guantanamo. The eight safeguards are: prompt review by independent courts; access to a lawyer for the detainee within a month of capture; a bar to coerced testimony, including, in Israel, a ban on stress positions and sleep deprivation; judicial review of classified evidence to determine if secrecy is justified; and periodic review of the detainee's status. 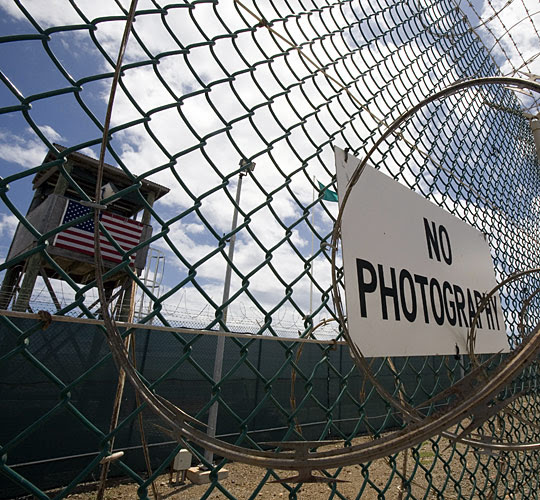 September 19, 2007 · The Senate on Wednesday voted against legislation that would have given Guantanamo detainees and other terrorism suspects the right to challenge their detentions in federal court.

The defeat was a blow to human rights groups that say a current ban on habeas corpus petitions could lead to the indefinite detention of individuals wrongfully suspected of terrorism.

President Bush and conservative Republicans have said the ban, which was enacted last year, was necessary to stem the tide of legal challenges that were flooding civilian courts.

"The truth is that casting aside the time-honored protection of habeas corpus makes us more vulnerable as a nation because it leads us away from our core American values," Leahy said. "It calls into question our historic role as a defender of human rights around the world."

In 2006, Congress passed and President Bush signed into law the Military Commissions Act, which established a military-run tribunal system for prosecuting enemy combatants. The provision bars habeas corpus petitions, which means that only detainees selected for trial are able to confront charges against them. That leaves most military detainees in custody without a chance to plead their case.

October 1, 2007 · The detainees claim that they have the right to challenge their imprisonment in the U.S. courts, using the constitutionally guaranteed procedure called a writ of habeas corpus. Historically, the writ has been an important mechanism in safeguarding individuals from arbitrary state action. It guarantees a complete review by a neutral fact finder to ascertain whether the government has justifiably jailed someone. The Guantanamo prisoners contend there is no neutral fact finder at Guantanamo hearings, no way for the prisoners to rebut secret evidence, no lawyer to help them to secure evidence of their innocence, and that the legal standard presumes them guilty.

Congress, they contend, violated the Constitution, when it stripped them of the right to challenge their detentions in court after an earlier Supreme Court ruling that permitted them to do so. The Constitution, they note, provides for suspension of the writ of habeas corpus only in cases of invasion and rebellion, and even then requires an alternative system of basic due process rights.

The Bush administration, backed by a federal appeals court, counters that since the men are being held outside the United States, they have no constitutional rights.

October 10, 2007 · The Pentagon has been stopped from transferring a Guantanamo Bay detainee to Tunisia, where he allegedly faces torture, according to a federal court ruling that marks a milestone in the treatment of detainees.

"This is the first time since Congress tried to strip court jurisdiction over detainees that a court stepped in and said to the administration, 'Hey wait. You can't do what you say you want to do,"' said Jennifer Daskal, senior counterterrorism counsel for Human Rights Watch.

"It's the first time the judiciary has given a detainee any substantive right — in this case it is the right not to be tortured by the Tunisian government," Denbeaux told AP by phone.

February 13, 2008 · Six detainees at Guantanamo Bay, including suspected Sept. 11 conspirator Khalid Sheikh Muhammad, have been formally charged with murder and conspiracy. The Pentagon is seeking the death penalty if convicted.

Why haven't the trials of the accused September 11th bombers ever been broadcast in the mass media?

February 22, 2008 · Guantanamo Bay detainee Salim Ahmed Hamdan faces life in prison if an upcoming military tribunal convicts him of conspiracy and supporting terrorism. Now Col. Morris Davis, the former chief military prosecutor at Gitmo, says he will testify on Hamdan's behalf if permitted to do so.

A photo perspective, by Louie Palu's, from the Atlantic Monthly.