A Message to the People of the United States of America, 1998

A Message to the People of the United States of America
Posted by qazi@afghan-web.com the Wednesday, September 12 2001 @ 15:49:24 MEST

Through the United States SenateCommittee on Foreign Relations

Hearing on Events in Afghanistan

In the name of God

Mr. Chairman, honorable representatives of the people of the United States of America,

I send this message to you today on behalf of the freedom and peace-loving people of Afghanistan, the Mujahedeen freedom fighters who resisted and defeated Soviet communism, the men and women who are still resisting oppression and foreign hegemony and, in the name of more than one and a half million Afghan martyrs who sacrificed their lives to uphold some of the same values and ideals shared by most Americans and Afghans alike. This is a crucial and unique moment in the history of Afghanistan and the world, a time when Afghanistan has crossed yet another threshold and is entering a new stage of struggle and resistance for its survival as a free nation and independent state. 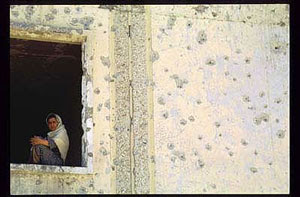 I have spent the past 20 years, most of my youth and adult life, alongside my compatriots, at the service of the Afghan nation, fighting an uphill battle to preserve our freedom, independence, right to self-determination and dignity. Afghans fought for God and country, sometime alone, at other times with the support of the international community. Against all odds, we, meaning the free world and Afghans, halted and checkmated Soviet expansionism a decade ago. But the embattled people of my country did not savor the fruits of victory. Instead they were thrust in a whirlwind of foreign intrigue, deception, great-gamesmanship and internal strife. Our country and our noble people were brutalized, the victims of misplaced greed, hegemonic designs and ignorance. We Afghans erred too. Our shortcomings were as a result of political innocence, inexperience, vulnerability, victimization, bickering and inflated egos. But by no means does this justify what some of our so-called Cold War allies did to undermine this just victory and unleash their diabolical plans to destroy and subjugate Afghanistan.

Today, the world clearly sees and feels the results of such misguided and evil deeds. South-Central Asia is in turmoil, some countries on the brink of war. Illegal drug production, terrorist activities and planning are on the rise. Ethnic and religiously-motivated mass murders and forced displacements are taking place, and the most basic human and women’s rights are shamelessly violated. The country has gradually been occupied by fanatics, extremists, terrorists, mercenaries, drug Mafias and professional murderers. One faction, the Taliban, which by no means rightly represents Islam, Afghanistan or our centuries-old cultural heritage, has with direct foreign assistance exacerbated this explosive situation. They are unyielding and unwilling to talk or reach a compromise with any other Afghan side. 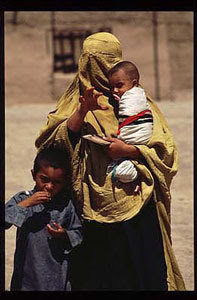 Unfortunately, this dark accomplishment could not have materialized without the direct support and involvement of influential governmental and non-governmental circles in Pakistan. Aside from receiving military logistics, fuel and arms from Pakistan, our intelligence reports indicate that more than 28,000 Pakistani citizens, including paramilitary personnel and military advisers are part of the Taliban occupation forces in various parts of Afghanistan. We currently hold more than 500 Pakistani citizens including military personnel in our POW camps. Three major concerns - namely terrorism, drugs and human rights - originate from Taliban-held areas but are instigated from Pakistan, thus forming the inter-connecting angles of an evil triangle. For many Afghans, regardless of ethnicity or religion, Afghanistan, for the second time in one decade, is once again an occupied country.

Let me correct a few fallacies that are propagated by Taliban backers and their lobbies around the world. This situation over the short and long-run, even in case of total control by the Taliban, will not be to anyone’s interest. It will not result in stability, peace and prosperity in the region. The people of Afghanistan will not accept such a repressive regime. Regional countries will never feel secure and safe. Resistance will not end in Afghanistan, but will take on a new national dimension, encompassing all Afghan ethnic and social strata. 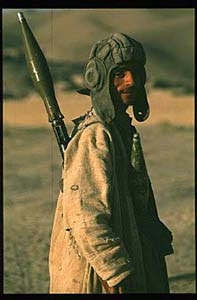 The goal is clear. Afghans want to regain their right to self-determination through a democratic or traditional mechanism acceptable to our people. No one group, faction or individual has the right to dictate or impose its will by force or proxy on others. But first, the obstacles have to be overcome, the war has to end, just peace established and a transitional administration set up to move us toward a representative government.

We are willing to move toward this noble goal. We consider this as part of our duty to defend humanity against the scourge of intolerance, violence and fanaticism. But the international community and the democracies of the world should not waste any valuable time, and instead play their critical role to assist in any way possible the valiant people of Afghanistan overcome the obstacles that exist on the path to freedom, peace, stability and prosperity. Effective pressure should be exerted on those countries who stand against the aspirations of the people of Afghanistan. I urge you to engage in constructive and substantive discussions with our representatives and all Afghans who can and want to be part of a broad consensus for peace and freedom for Afghanistan.

With all due respect and my best wishes for the government and people of the United States,

The court has ruled that the FCC has no jurisdiction over the internet!

People have to remember, all media—television, radio, phone service—every type of media other than the printed page, will soon be delivered by a broadband or internet connection. That means these wonky sort of arcane rules that are being played out at the Federal Communications Commission and in the court ruling yesterday, these will shape the media for generations, what it looks like, whether independent voices like Democracy Now! can get into the suite of options that people have across the country when they turn on a television. It will determine whether we can bridge the digital divide that currently has the United States slipping from fourth in the year 2000 to twenty-second in broadband adoption and speed and affordability. It will really determine whether or not we will have a twenty-first century internet economy or whether we’ll continue to lag behind the rest of the world.

Call him [(202) 418-1000, and 888-CALL-FCC (888-225-5322)], email him [ Julius.Genachowski@fcc.gov ], and tell Federal Communications Commission chairman Julius Genachowski you want Network Neutrality, all information on the internet must be equal, or we loose free speech and we loose our democracy!

The future of American Free Speech, and thus our democracy, rests in your hands.

Just because a company owns the INFORMATION INFRASTRUCTURE does NOT give it the right to regulate which information we will be 'allowed' to communicate! Any company that passes information from one state to another falls under Federal Jurisdiction. Thus, ALL INTERNET SERVICE PROVIDERS should fall under FCC jurisdiction. COMCAST is an interstate information infrastructure corporation, and must not be allowed to regulate free speech.

Here’s the deal: under the Bush FCC, the agency decided to classify and treat broadband Internet service providers the same as any Internet applications company like Facebook or Lexis-Nexis, placing broadband providers outside of the legal framework that traditionally applied to the companies that offer two-way communications services.

That’s the loophole that let Comcast wiggle out from under the agency’s thumb.

There’s an easy fix here: The FCC can change broadband back to a “communications service,” which is where it should have been in the first place. By reclassifying broadband, all of these questions about authority will fall away and the FCC can pick up where it left off – protecting the Internet for the public and bridging the digital divide.

After Halliburton subsidiary, Kellog Brown and Root (KBR), tragically raped Jamie Leigh Jones, she fought to have them held accountable in court. She was stopped by the contract she signed with Halliburton (mistake) which called for binding, secret arbitration. After four years of litigation to get her day in court, Senator Al Franken added an amendment to the 2010 Defense Appropriations Bill, that will outlaw hiring any contractor that requires binding, secret arbitration in cases of sexual harassment or assault (seems reasonable but the KBR attorney didn't think so).


This is what a Senator is supposed to do to protect our citizens. Imagine what would have happened if a Republican had been elected to Al Franken's Senate Seat in Minnesota?

"People don't enslave human beings to be mean to them, they do it for a profit." - Kevin Bales: How to combat modern slavery

Traditionally Slaves have been valued at about $40,000 in today's (2010) dollars, because people were rare and valuable, but the population explosion of the twentieth century had driven down the value of people to an average of about $90 worldwide. We can end modern slavery with sustainable liberation for $10.8-Billion, worldwide liberty.

If we can't end slavery today, are we truly free?