Combat Obscura - from The Intercept 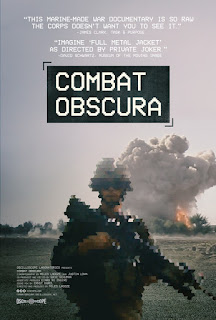 See the Documentary: “Combat Obscura”
"I want there to be some accountability. I don’t want people just to look at the soldiers and Marines as hapless victims that were sent out there, and it was just the big politicians that are responsible. No. I think the soldiers are responsible, the politicians are responsible, but also the American people are complicit. Our tax money funded the war. It’s not just the soldiers and the politicians. It’s the everyday citizens. We’re all responsible because we didn’t really give a shit. We didn’t notice it. We didn’t pay attention."
https://theintercept.com/2019/04/07/combat-obscura-afghanistan-war-documentary/?fbclid=IwAR0SgfYs4gdS-hFrXrfhFSFP5ke7gIV1zCWSpm40UDLdacPH6xEsr03Bmz8

Camille Baker
April 7 2019, 7:00 a.m.
“Combat Obscura” begins with explosions. Half a second later, a great column of smoke materializes in the distance, quickly doubling and then tripling in size. But most frightening of all is what’s happening behind the camera. A man yells, in English, as the cloud grows past the top of the frame. “Holy shit,” he says. “That’s the wrong building!” Another explosion sounds, and a fireball billows. “Holy shit!” he yells again; he is gleeful, fascinated now. “Yeah, boy!” he shouts.
In “Combat Obscura,” a new documentary set in Afghanistan, Marines don’t do what they normally do in American-made documentaries about war – they don’t echo narratives of God and country, kill bad guys, and win hearts and minds. In “Combat Obscura,” Marines shoot guns and patrol, but they also insult women, shake their weapons at children, die needlessly and with little dignity, murder innocent people and cover it up. At one point in the film, a Marine points his gun at children passing by on donkeys. “Where’s the fucking Taliban? Where’s the fucking Taliban?” he screams in their faces. They look back in fear and incomprehension. The Marine hands one of the boys a chocolate bar, but it does not feel like a kindness. 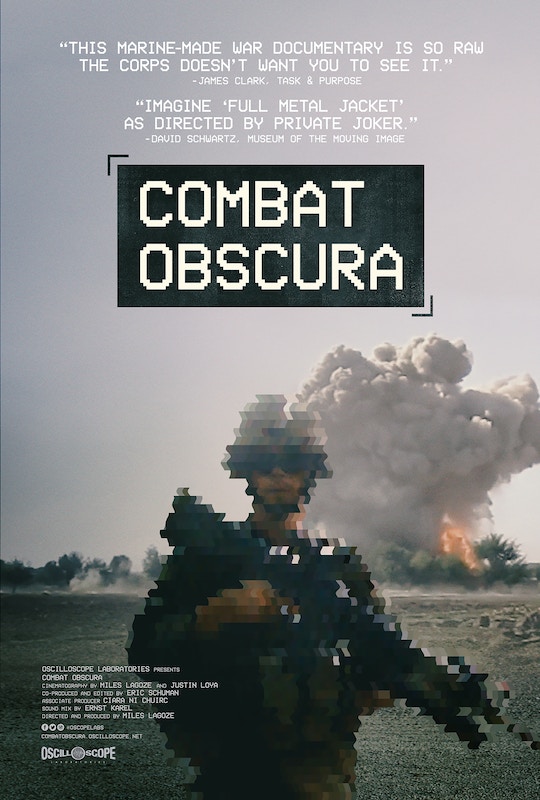 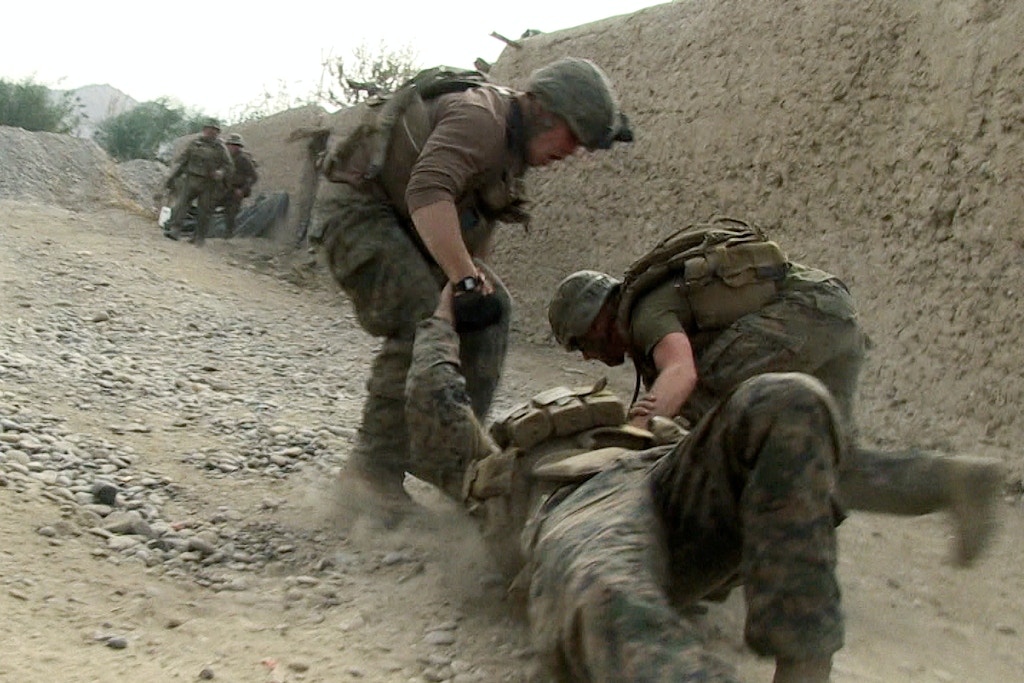 Photo: Courtesy of Oscilloscope Laboratories
Another theme in the documentary is masculinity. Can you talk a little bit about that, and if your perception of it has changed since you were in Afghanistan?
It would actually be interesting to go see what the Marine Corps is like now that women are in combat roles, because when we were there, they weren’t allowed in the infantry. They could serve other jobs, but they couldn’t be in active combat. So the Marine Corps that I knew was extremely toxic. Even boot camp. The drill instructors would literally tell you that your girlfriends are whores and they’re cheating on you as we speak. So they instilled this innate hatred of women from the beginning.
It’s hard to imagine what fighting a war would look like if there wasn’t toxic masculinity involved in the training process. Because you’re being trained to kill people, and to not be thoughtful about those things, and to basically be excited to go to war.
Tell me about your decision to portray the shooting of a Marine, Jacob Levy. Was that a complicated one for you?
Yeah, definitely. I felt guilty for a long time for just filming it.
Instead of intervening?
Or just maybe not recording it. Just being like, “You know what, I’m not even going to film this. People don’t need to see this.”
There’s filming it, and then there’s showing it. Filming it, okay. You were there, this was my job to film, sure, whatever. But then showing that and not sanitizing it at all, and sort of emphasizing it almost —I think it is the longest sequence in the film — was definitely a tough decision.
I talked to his mom. All the guys that were there go to see her every year on his birthday, and on the day that he died, too, so she has this cult of veterans. She’s like a super Gold Star Mom, and so getting her permission was really important, but it’s always going to feel kind of exploitative.
Ultimately, you think of all the documentaries that have come out about Afghanistan or Iraq, they tend to show a lot of dead Iraqis, dead Taliban, dead Afghan women, children. It’s like there’s no problem to show that, but then when there’s a dead U.S. soldier, that’s off limits. We didn’t want to value one life over the other.
So you got permission from Levy’s mother to put that in the film. Did you have to get releases from everybody who appeared in the film?
Not everyone. I was moving around so much to each platoon that I didn’t know everyone. But the guys smoking weed, I wanted to make sure they didn’t have government jobs now, which would get them in trouble. The statute of limitations has passed so it’s not like they could be retroactively dishonorably discharged if they’d been honorably discharged. I talked to lawyers about that before anything.
There wasn’t really anything else that was illegal. The dead civilian — they were cleared to shoot that guy, even though he was unarmed. So that tells you a lot about what goes into the rules of engagement in Afghanistan.
The guy chasing the kids with the pistol, he has a wife and kids, so I wanted to be like, “Are you going to want them to see this?” And he was like, “Yeah, man.” A lot of them are at a point where they want to be judged to a certain degree. Stop saying, “Thank you for your service.” It doesn’t make sense. It’s totally absurd.

“Combat Obscura” trailer Video: Courtesy of Oscilloscope Laboratories
How did you get the footage home?
Maybe you’re thinking that the military’s this really organized body that keeps track of everything, and it’s not. It’s just as disorganized as any other business or bureaucracy or government institution. Everyone had cameras, so they weren’t looking through other people’s cameras. They were mainly looking for guys bringing drugs back, bringing weapons like AK-47s that they had found from dead Taliban. There was one guy who tried to bring a grenade on the plane back, which is obviously not a good idea for a lot of reasons. So they weren’t like, “Alright, everybody take out their cameras now.”
If you had been through that experience, you’d almost died filming a lot of the stuff, you’d want to keep it. It was a diary of our experience, and I wasn’t just going to throw that away.
Did you have a legal process as you got closer to releasing the film?
I reached out to a lot of different people along the way. One of them was Phil Klay, who wrote “Redeployment.” He’s a National Book Award winner, and he was public affairs in the Marine Corps around the same time that I was there. And I was like, “I want to get this released somehow, but I don’t want to deal with the Marine Corps itself, because I know that they would just flip out.” So he told me about the review process at the Pentagon. And I sent it to the Pentagon, they cleared it, it was unclassified.
But then the Marine Corps heard about it. The Pentagon sent it to the Marine Corps. The [Naval Criminal Investigative Service] was calling me, and different people at the Marine Corps. The Marine Corps Entertainment [Media] Liaison Office wanted to meet with me. And that’s when I was like, I need to get a lawyer or something.
[The Knight First Amendment Institute at Columbia University] kind of took me in pro bono. Without them, I’d be in a whole bunch of legal trouble. And they got another legal firm involved called Jenner & Block that does a lot of pro bono stuff. Once I had them in my corner, I think just their presence had an effect on the Marine Corps. Right now, they’ve publicly stated that they’re not pursuing legal action.
You mentioned your guilt about filming a fellow Marine being shot. Do you feel guilt about participating in this war? And if so, how have you dealt with that?
Absolutely. The veterans that are actually honestly reflecting about it [have] a lot of conflicted feelings. On the one hand, you went there and you made it out alive, and it’s such a transformative experience at such a young age that it’s hard to disconnect from the emotional experience you had there and the friends that you lost, and the buddies who left body parts there. It’s hard to disconnect from that and go, “Our presence there was not just a waste, but my presence there probably could have made things worse.” I know a lot of vets who are unwilling to come to that because while they were out there, they truly felt that they were helping Afghans, because they were fighting against the Taliban.
But you have to think about it: While we were there, we created an almost uninhabitable environment for the Afghan civilians. Because before we were there, they were oppressed by the Taliban. While we were there, they were caught in the middle between two oppressive forces. And how many times did we bomb their houses? How many times did we mistakenly kill innocent people?

I’m in
I can find myself debating with someone whether we should stay in or leave Afghanistan. The Afghan army has lost more soldiers the past two years than we did the entire time we’ve been there. They’re getting absolutely massacred by the Taliban. And these guys have lost their whole families to this conflict. This is going to haunt them forever — they’ve paid the ultimate sacrifice. Not U.S. troops. The Afghans themselves have lost more than we have by a landslide.
And some of them don’t want us to leave, because if we leave, then they’re done. Because they don’t want the Taliban to win, to go back to what it was before we were there. But there are civilians there that are like, “What are we going to do? A perpetual standoff? A conflict that’s never going to end?” And they’re just caught in the middle.
The personal aspects of the film where you can hear me, or where I’m asking questions, or where I’m filming in a certain way — we left that stuff in the film because of my responsibility and the role that I played and the guilt that I feel about it. I’ve been dealing with it by making this movie.
I want there to be some accountability. I don’t want people just to look at the soldiers and Marines as hapless victims that were sent out there, and it was just the big politicians that are responsible. No. I think the soldiers are responsible, the politicians are responsible, but also the American people are complicit. Our tax money funded the war. It’s not just the soldiers and the politicians. It’s the everyday citizens. We’re all responsible because we didn’t really give a shit. We didn’t notice it. We didn’t pay attention.